A Comprehensive Guide to Vietnamese Food in Hanoi - Food Guide

Hanoi, the city of traditional cuisine

Hanoi is the capital of present-day of Vietnam and the ancient kingdoms of northern Vietnam since the second millennium. The city has a deep history and there is no better way to understand that than to try food. Our food shows the true color of the Vietnamese tradition, as well as the many colors that make up each region. Different from the food in central Vietnam, where the pungent and spicy taste dominates; and different from the food in South Vietnam, where people love sweet and sour pepper; The food in Hanoi, as well as the food in the North, is rich in flavors but not as acidic, sweet and spicy as other areas.

Travel around the country with food and you will not regret it, especially in Vietnam. Try new types of flavors, new tastes, new types of textures and your journey will become colorful. When you arrive in Hanoi, why not try these ten dishes that I recommend below and comment to tell me what you think? I guess you've wondered that where is the best restaurants near me, this is very famous rice noodle soup from Vietnam because its delicacies have spread all over the world. But to really enjoy the broth and herbs, you have to try this bowl of soup and noodles in Vietnam, but start with Hanoi. Nobody knows exactly when the pho was invented, they just know that this dish appeared a long time ago and that it is an indispensable dish of the citizen of the capital. Nowadays, pho has spread widely throughout the country and even abroad. Nevertheless, the Hanoi pho still retains these particular characteristics that only the so-called "origin of the dish" possesses. You may have tried pho a few times before going to Vietnam, but you'll find out why pho in the capital beats pho everywhere else.

Pho has three components: broth, rice noodles and meat (usually beef or chicken). It is also accompanied by a plate of herbs. 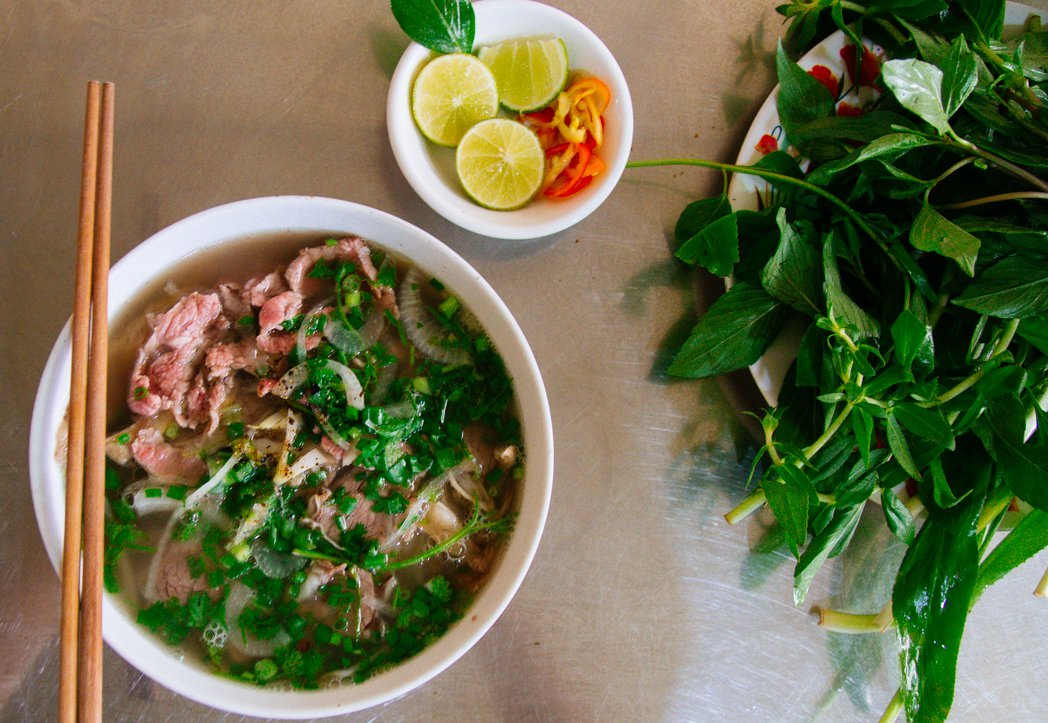 The Pho Cuon - Pho Rolls - is also a long-time dish in Hanoi. I'm sure you noticed that the word "pho" appears on both plates. And yes, they have similar meanings! Pho cuon and pho have a common ingredient: the banh pho, the rice cake that is cut into thin strips to make noodles. However, banh pho in the pho rolls does not look like a noodle. In fact, banh pho is first cut into a circular or rectangular shape. 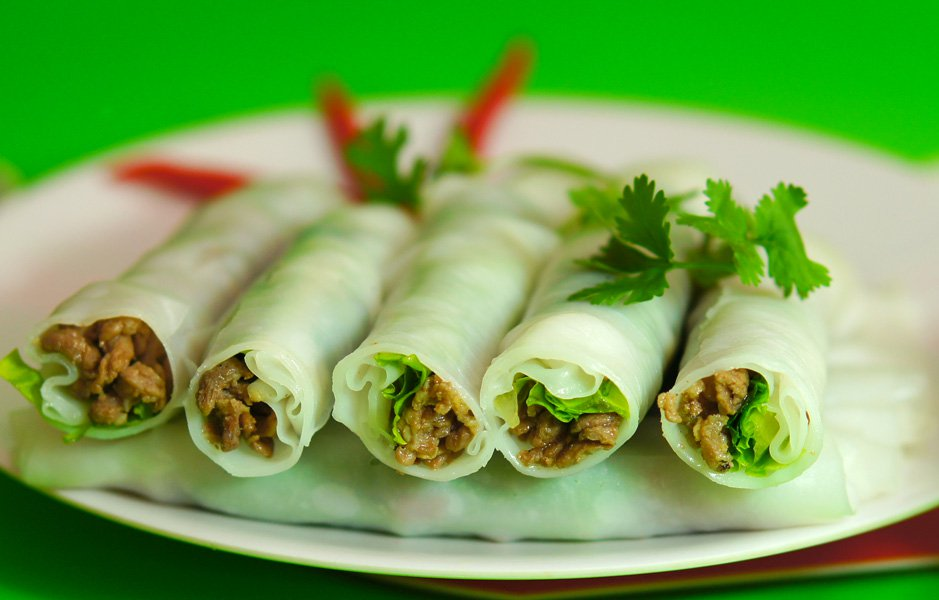 When people do regular pho, they cut banh pho into small strings or noodles. To make pho rolls, they use the original form of banh pho, then add ingredients such as beef, coriander, lettuce, mung bean sprouts and endive. Once the ingredients are added, the banh pho is wrapped and packed in stuffed cylindrical pieces. You will eat pho cuon with a sauce made from fish sauce, garlic, chili and lime. 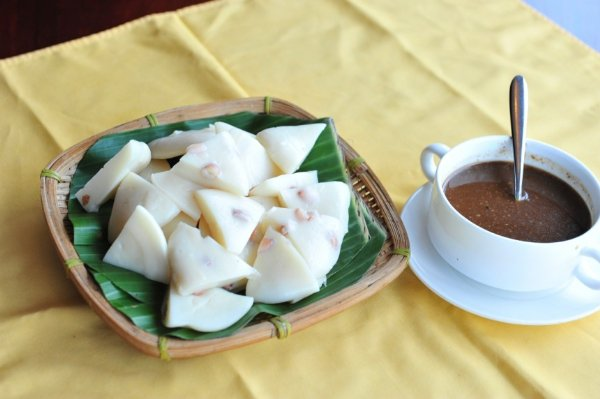 Banh Duc is a series of steamed cakes made from rice flour and molded in different shapes, usually a circle, a rectangle or a triangle. You will eat this delicious type of rice cake with sauces and there are often peanuts inside. The Banh Duc has two common varieties in Hanoi: the tasty banh duke and the natural banh duc with peanut.

The tasty banh duc is placed in a bowl and the meat sauce is poured directly on top. The peanut cake is cut into small pieces and dipped in a sauce. Each dish brings different tastes; while banh duc nature peanut has a simple taste of rich rice flour, a little brittle and slightly sweet peanut, the savory brings aromas and appearance much more sophisticated. 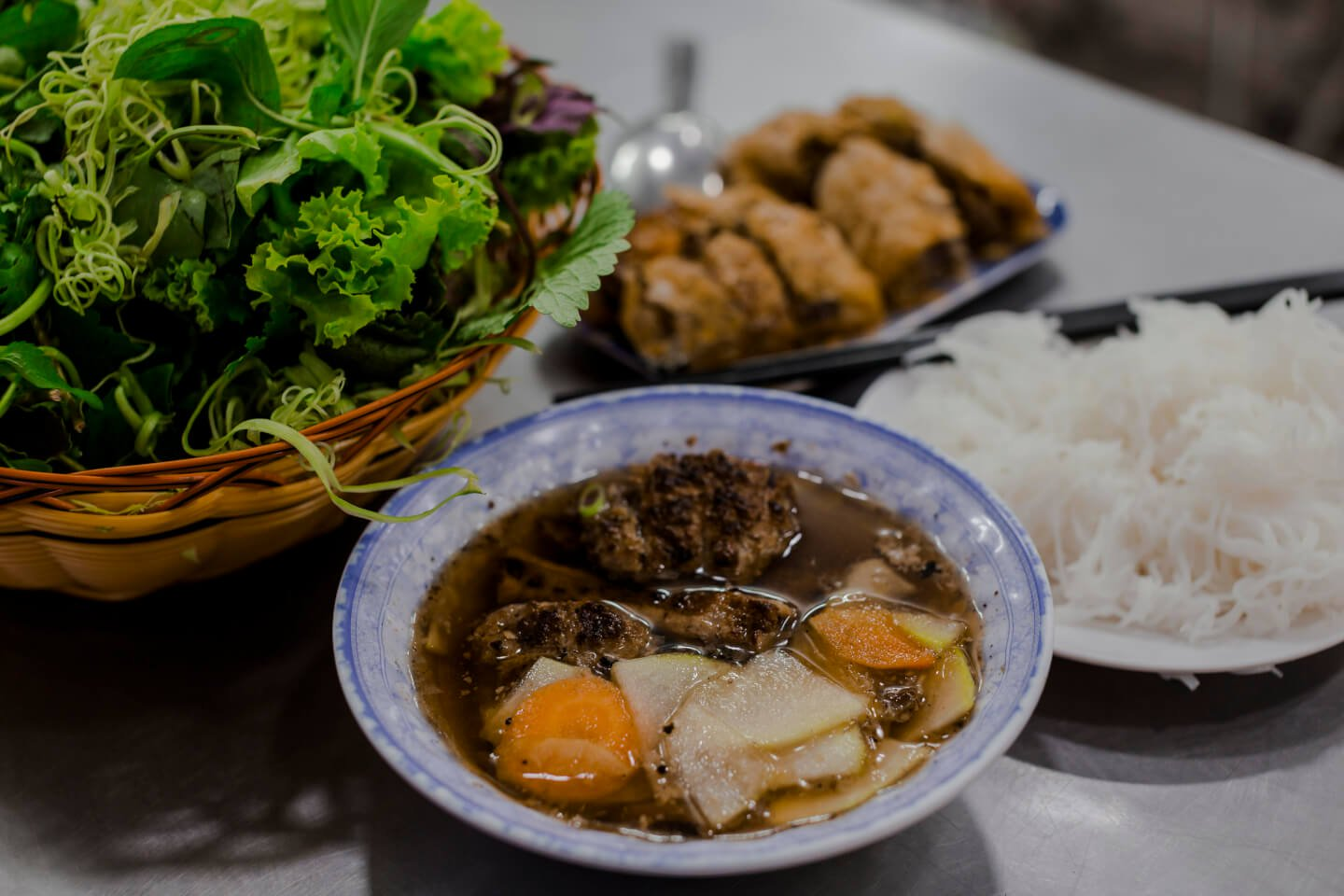 Bun cha is a very typical dish of the capital. This type of noodle dish is very easy to eat, it can be eaten at any season and, more importantly, it is cheap but excellent. You'll never believe that such a simple dish made of rice vermicelli, a grilled pork bowl and a bowl of sweet and sour sauce with papaya has fascinated many people, including Barack Obama during his visit to Vietnam in 2016.

Com (green rice) in the village of Vong According to legend, thousands of years ago, in the autumn, when the harvest began, the rains began to rain and the downpour finally drowned all the rice fields. The villagers of Vong decided to harvest the immature grain heads to bring them home and roast them to fight hunger. Incredibly, they discovered that this roasted grain had a very special and wonderful taste. Since then, the villagers of Vong generally prepare this dish to eat it in autumn. Many famous Vietnam writers have written on the subject in the village of Vong. Thach Lam - a famous Vietnamese revolutionary writer - said: "Com is a distinct presence of the country, a gift from the huge green rice fields; it bears all the tastes of the simplicity and purity of the Vietnamese countryside. You wonder why this rice is green? The green color comes from its lotus leaf packaging.

Bun thang is a special dish both by name and manufacturing. In the past, Hanoi women cleverly used the rest of the Tet food (Vietnamese New Year) and combined leftovers to create a tasty and economical new dish. The name of the dish is derived from this sentence: "Thang thuoc bo", which means a package of rejuvenation. Bun thang consists of many nutritious ingredients mixed together, just like the method used in oriental medicine to mix herbs. This dish consists mainly of noodles and chicken soup; In addition, people can eat it with duck eggs, shrimp, squid, onions, garlic or shiitake mushrooms. This combination makes bun thang not only a delicious food, but also very nutritious. 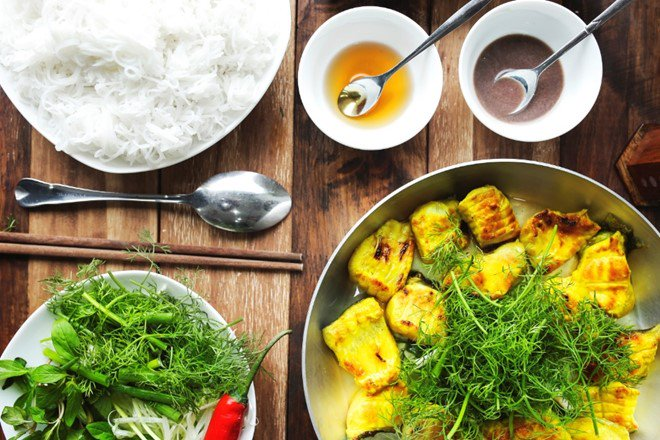 The fish cake cha has appeared all over Vietnam with different tastes, but this has a distinct taste in comparison. The Doan family, who invented the flavor of this dish, has a secret recipe and this secret was inherited only by the eldest son of Doan. In general, they cut the fish into small pieces, then marinate and fry before grilling. This food is so famous that the street where Doan live and sell cha cha is now known as "Cha Ca Street". In their restaurant, the Doan family placed a statue of La Vong (a chef from the 11th century BC), which is why people call this dish "cha ca la vong" and is the best restaurants near me. 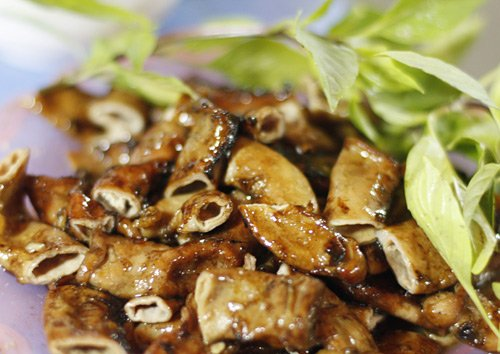 There are some restaurants located in Gam Cau Street, which is hard to believe because the name of the street translates literally as "under the bridge". And Gam Cau Street, as its name suggests, is really under bridges in Hanoi. Settling in the restaurant, trying the grilled pig guts and watching the train go by on deck will be a memorable and peaceful moment of your trip. These restaurants offer several grilled dishes: tripe, stomach, rectum, beef, etc. I guarantee the food security of these restaurants because of their reputation, so you will not have to worry. If there are a lot of Vietnamese there, eat it!

Xoi Xeo is a typical breakfast food for Hanoians. It is made of sticky rice steamed and other delicious ingredients. During the steaming process, the rice is mixed with chicken fat. This steamed rice is then combined with mung bean, steamed and ground, and topped with crisp fried shallots. This xoi xeo yellow fresh is packaged in a lotus leaf. The smells of chicken fat, crisp fried shallot and lotus leaf combine to create an indescribable yet delicious scent of xoi xeo.

Culinary Tour in Hanoi with Onetrip

It's fun to discover the gastronomic secrets of the city, but it's sometimes tiring to try to make sure you serve all the famous dishes. How to sit in the back of a motorcycle, watch Hanoi at night and stop near the most delicious food stalls in the city? Onetrip will bring you such a romantic experience

The 10 Best Restaurants in Hanoi, Vietnam